In response to a commission by Ipswich Central, the Business Improvement District (BID) for Ipswich, leading architects and urban planning firm Allies and Morrison put forward 10 blue-sky ideas about how they think the Ipswich Vision could look in the future. Their ideas aim to make the town future-proofed, more dynamic and environmentally-friendly whilst respecting the town’s historical character and rich heritage.

Ipswich Central hope that the ideas from Allies and Morrison help to stimulate debate around urban planning and help to advance the Ipswich Vision in collaboration with it’s partners.

With the future of retail uncertain, now is an important time to think carefully about what will become of our towns and cities in the years to come. The Ipswich Vision has already made progress in developing the town with successful projects such as the regeneration of the train station, the repaving of Queens Street and Princes Street and the Cornhill project which is currently underway.

Lloyds Avenue – a vibrant avenue to the heart of the town.

Allies and Morrison have proposed to regenerate Lloyds Avenue; which, once Crown Street car park has been completed and the Cornhill has been unveiled, will become a key access point to the town centre. The idea is to make Lloyds Avenue a vibrant and energetic entrance to the town with a particular focus on outdoor dining and establishing a new music venue to bring new life into this once prominent area of the town.

Riverside Park – an attractive parkland link between the station and the waterfront.

Another idea is to create a new riverside park between Sir Bobby Robson Bridge and Stoke Bridge; creating a fresh, green spaces along the riverbanks from the train station to the waterfront; which would not only make for an attractive stroll from the station to the waterfront, but also improve the view for visitors and residents crossing the bridge from the stations and heading down Princes Street. This regeneration would also encourage new development in the currently vacant land between Cardinal Park and the river.

St Peters Dock – a dynamic arts-lead gateway to the waterfront.

The area of St Peters Dock is a key entry point to the waterfront and yet has long been abandoned. Allies and Morrison propose pedestrianising the area to make the area around Stoke Bridge more attractive and creating an impressive entrance the the waterfront (continuing their Riverside Park concept). Meanwhile, the iconic R&W PAUL building could become a new contemporary arts venue and work to build on the waterfronts dynamic offer.

Another area between the town centre and the waterfront that has long been neglected is the gyratory road system made up of Star Lane, Key Street and College Street; a loop that has long been a headache for motorists. Allies and Morrison propose to pedestrianise College Street and parts of Key Street whilst allowing two-way traffic down Star Lane to ease the flow of traffic. Pedestrianising College Street would also continue to improve the entrance to the waterfront, open up the St Peters Dock area and create a smoother flow from the town centre to the waterfront.

The full document of ideas from Allies and Morrison is available online: CLICK HERE TO VIEW

Ipswich Central hopes that the ideas proposed by Allies and Morrison inspire and invigorate the town and help to develop the plans of the Ipswich Vision and support Ipswich Borough Council’s exciting new Public Realm Strategy (PRS); and showcase the enormous potential for the future of Ipswich. 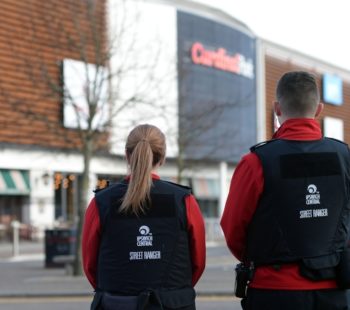 Our Street Rangers are the eyes and ears of the BID area, helping to make Ipswich more welcoming and aiding businesses with stolen goods and other on-street issues. Their increased training in… The official visitor brand for Ipswich Promoting the town and local businesses is a big part of what we do at Ipswich Central. To help us do that, we have a dedicated visitor website and consumer…